During the early weeks/months of my pregnancy with Olivia, Alyssa insisted we were having a little sister. She declared that she wanted a sister and nothing else (as in, a brother) would do. 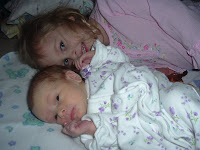 We had our big ultrasound (a level II because I'd failed one of the tests that scanned for potential chromosomals disorders, big surprise there, huh?) and got the confirmation that we were, indeed, having a little sister, Alyssa changed her tune.

Suddenly, she was just sure we were having a little brother and she wanting nothing else.

She's an odd one, that girl.

Tom's older daughter, who was 16 when Alyssa was born nad 19 when Olivia was born, was disgusted with our tendancy toward creating girls. She'd been the only daughter for 16 years before Alyssa was born. She had two brothers from Tom and his ex-wife and three step brothers from her mother's remarriage. She'd grown accustomed to being the 'princess.' Sharing her world with sisters wasn't a choice Jessica would have made.

Alas, girls we had. And honestly, I couldn't have been happier.

I grew up with two younger brothers. (And a boatload of cousins practically next door and sometimes in the next room, but that's another topic for another day.)

I adore my brothers. Jason is four years and seven months younger than I am and Mitchell is thirteen years my junior. In fact, Mitchell is only two months older than my oldest step son. Weird.

Anyway, a couple of weeks ago, Alyssa lamented, "I wish I had a brother."

I laughed and said, "But we like your little sister. I don't think we should trade her for a brother."

Alyssa rolled her eyes at my attempt to be funny and said, "I want us to keep Livie AND have a brother."

Ooooh, Sweetie. So not happening.

I've said often enough that I'm glad to be done with the infant stage. The infant stage is hard on me. I am old these days. (Forty, remember?)

But...the more I thought about it...if I'm completely honest I will admit that if we were wake up tomorrow or next week and find that we are independently wealthy and I can quit my job and stay at home and care for our two daugthers, I would be willing to have another baby in a heartbeat.

I know. I'm forty. But...I've had two babies. I could probably have another even at my ADVANCED MATERNAL AGE. And I would. If I could be at home to care for him or her as well as the two I've already got.

So it's not so much the age thing or even the infant thing that stops me from having another. It's the fact that I don't have enough time with the two that are already here. So, poor Alyssa. No brother for her. But hey, she's got a pretty sweet sister so...

And last weekend we did borrow my nephew for a night. He's practically a brother for Alyssa, you should see how those two fight. 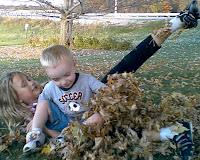 I'm not a fan of the infant stage either!!! We are only going to have one child and I'm sure I'll hear about that from Banks when he gets older. But he's not 'the one having to care for the little baby! Even though I could(b/c I'm only 34) but my husband is 51 and it's a LOT of work :)

Forties is not old at all!! You are still very young! I know it's tough especially to have to start over again. I wish there was a way more moms could stay at home if they wanted too. It just does not seem fair to have to work out all day (although the social interaction is a plus) then come home and start all over again. Borrowing is always good :P

I agree...if we were wealthy and I didn't have to work, we'd have more too!!! P.S. You would LOVE having a boy!